Healing Little Hearts (HLH) is a registered charity set up to send specialist medical teams internationally from all over the UK to perform life-saving operations on babies and children with congenital heart disease (CHD). Each team stays for one week, donating their time for free, and operates on between 10-12 children per trip. They also train junior doctors and nurses in children’s heart care with the eventual aim of helping the centres to become more self-sustaining.

A grant of £6000 will fund a medical camp to various parts of the world where there is urgent need for intervention to save the lives of children with congenital heat disease.

The funds will be used to support the travel, accommodation and organisational costs for sending a team of medical experts to deliver free medical care to paediatric patients with congenital heart disease who require corrective surgery. 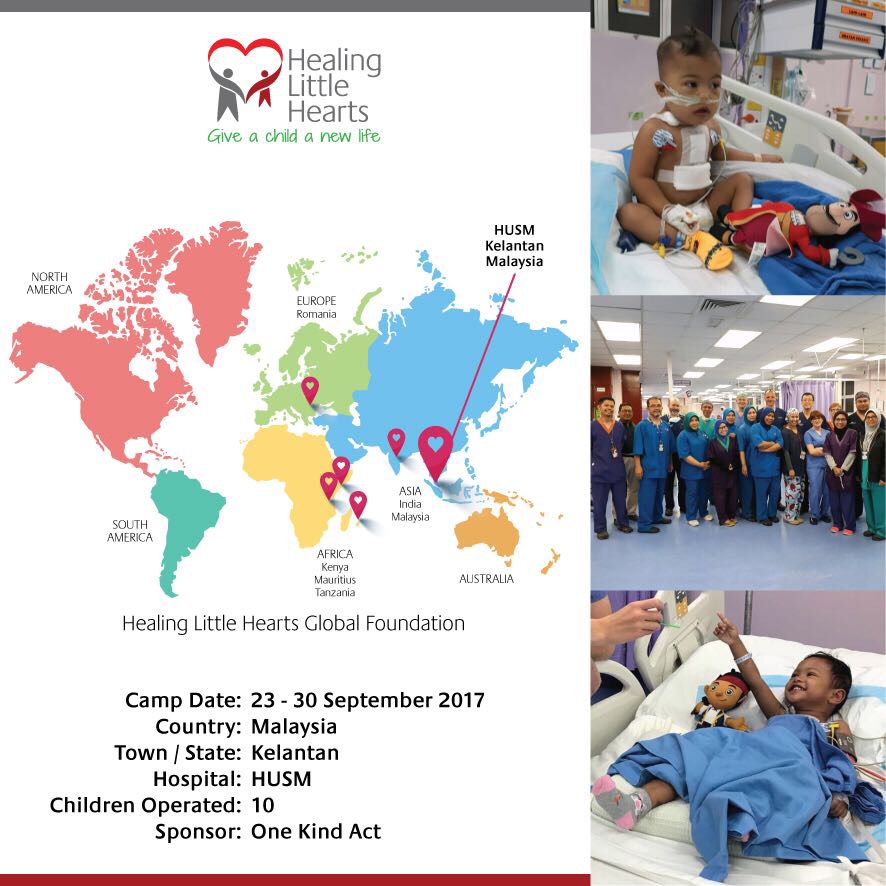 The Leicester based charity, Healing Little Hearts (HLH), was established in 2007 to address the unmet medical need in the treatment of congenital heart surgery in India.

Each camp in India and beyond is supported volunteer medical and nursing team (every 6-8 weeks) and costs approximately £6000 per camp.

The reach of the HLH team has extended beyond India having now worked in Malaysia, Mauritius, Kenya and Tanzania, with ongoing planning in other countries.

In 2016 alone, 21 camps and 281 operations were conducted to ensure that children received deserving care and to initiate local capability to become self-sufficient. Over the last 10 years HLH has operated on 1093 children with heart defects

The Malaysian camp in Kelantan will be the 10th camp undertaken this year.

1. Sending entire team of doctors and nurses to selected Hospitals who already have the basic infrastructure for and are keen on developing a heart service for children. HLH would go to such hospitals 3-4 times per year.

2. A smaller team of Children's specialists who specialise in the post-operative care or post- surgery care visit Hospitals where there are Surgeons capable of operating safely on children but there aren't the required Intensive Care Specialists. There is a huge dearth of training in the developed world for post-operative care. Good post-operative care literally makes the difference between life and death for those patients

3. Guidance and advice on capacity building i.e how to build Heart Units from scratch

4. Collaboration with other similar NGOs who are short staffed. Recently an HLH ICU nurse went to Muhimbili Hospital, Tanzania to work with an Australian team as they were short of an ICU nurse

As a result of many many people donating their time for free, there are virtually NO administration costs and all the donated money is spent on sending teams of doctors and nurses to perform heart surgery for children.

Healing Little Hearts are pleased to announce that the forthcoming camp in Kelantan, Malaysia from 23-30th September is being wholly supported by the London based charity One Kind Act. HLH and OKA share the same vision and aspiration to ensure that as many sick children receive the care they deserve and to build sustainable models of care in areas that have been under-served or riddled with inequality.

About One Kind Act

One Kind Act Change Communities and lives of others globally who suffer as a result of Poverty of Health, Nutrition and Education and may have Fallen Through The Net of the larger charities. Learn More here

There are so many ways to get involved with One Kind Act today: